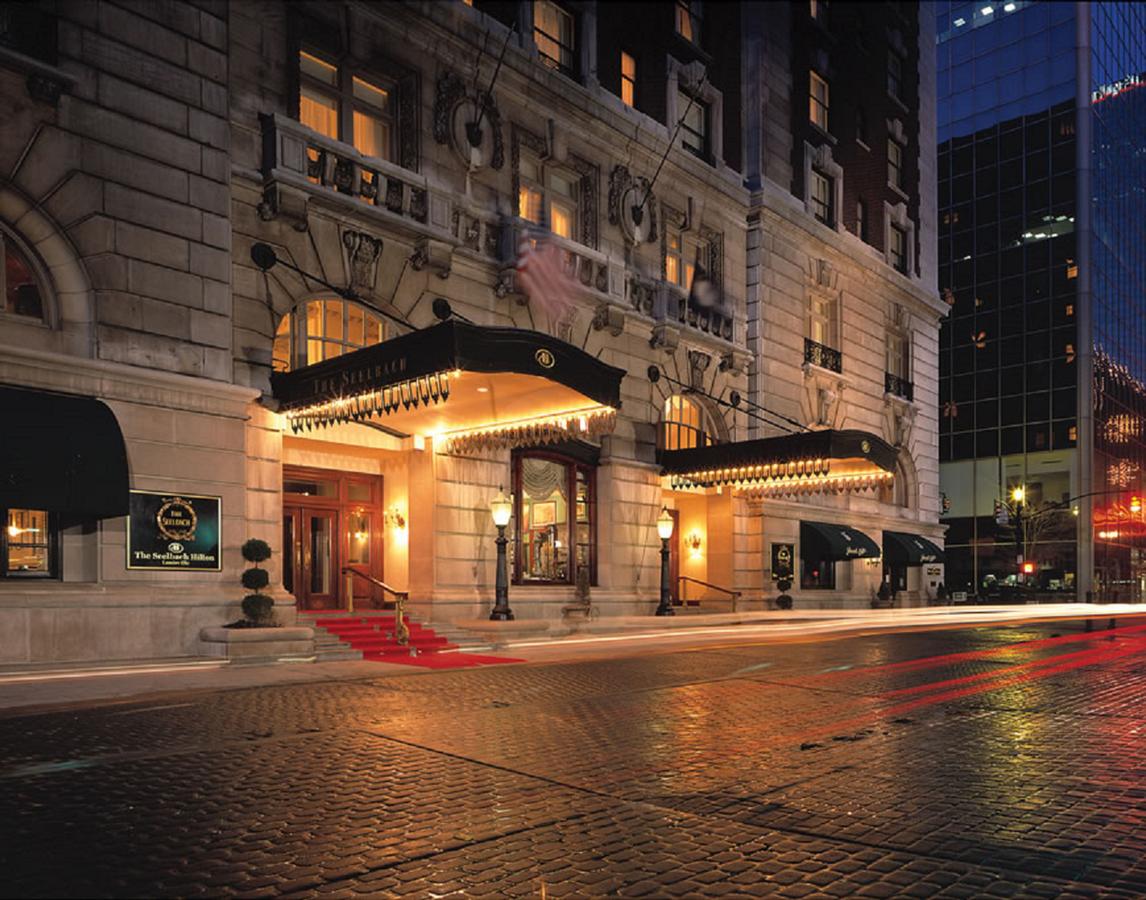 Welcome to the Seelbach!

The story of the Seelbach Hotel dates back to 1903. It began when the Seelbach brothers, who were recent immigrants from Bavaria, decided to open a luxury hotel in downtown Louisville that would capture all of the old-world elegance of the European hotels they had fallen in love with in their childhood. They decided on a Beaux-Arts Baroque style and imported materials from all over the world, including marble from Italy, bronze from France, table linens from Ireland, and exotic wood from the West Indies.

The hotel took a couple of years to construct but was an instant success, and as of today, remains one of Louisville’s greatest landmarks. Among the Seelbach’s famous guests were Al Capone, F. Scott Fitzgerald, Elvis Presley, Robin Williams, and John F. Kennedy, along with at least 8 other U.S. presidents. Parts of the Paul Newman film The Hustler and the 2013 version of The Great Gatsby were filmed at the Seelbach, and the iconic wedding scene of Fitzgerald’s classic American novel that inspired the movie was set at a hotel conspicuously called the Mulbach. 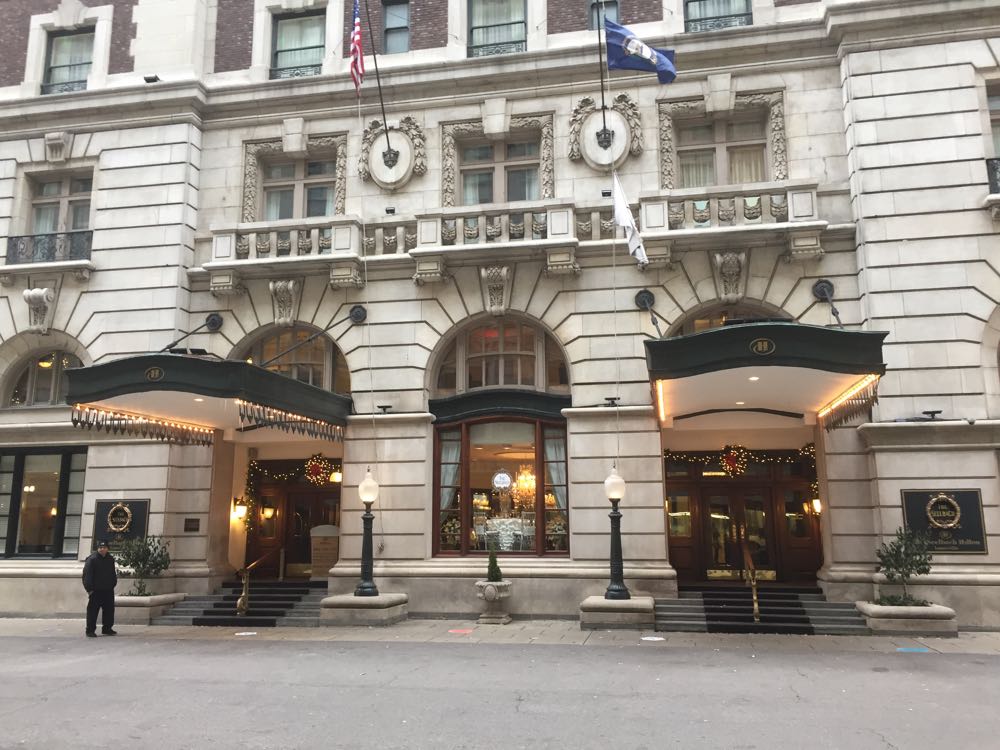 PPM’s Chapter in the Story of the Seelbach

Fast forward about 115 years, to late June of 2018 when Precision Property Measurements was contacted by John T. Campo & Associates, Inc., a full-service architecture and interior design firm based out of New Orleans, about helping them with a major renovation of the Seelbach. Campo Architects had recently been awarded the contract as lead consultant for the Seelbach renovation’s Concepting Phase and was looking to secure a reliable partner for an As-Built Survey of the hotel. They had previously worked with PPM through a Construction Manager on the Fairfield Inn & Suites Renovation in New Orleans, and found our services to be top-notch.

On smaller projects, Campo had sometimes done their own As-Builts or used a small local firm in New Orleans. But this project was different. The Seelbach hotel has 11 floors across 5 interconnected buildings, 321 guestrooms, 32,000 square feet of meeting space, and 2 subterranean levels. Campo wanted a pretty detailed scope of work including Floor Plans, Reflected Ceiling Plans, Electrical, and Exterior Elevations. For a project of this size, Campo needed an As-Built partner with a proven track record of success on large, highly-detailed projects.

In addition to PPM, Campo also contacted 2 other As-Built surveying companies for a proposal. The whole process took almost a month, and then in late July we got the call – PPM had landed the job! It was our expertise with hotel surveys, our detailed project timeline, and impressive reputation that encouraged Campo to hire us, and needless to say, we were beyond honored to help with the renovations of such an iconic Louisville building.

How we Completed the Seelbach As-Built Survey

For the Seelbach Hotel, we brought the same integrity and meticulousness that we bring to all of our projects – just to a larger scale. First, we made a detailed project plan and started communicating with the Hotel management immediately, to make sure everyone was on the same page. Campo wanted all of the As-Built drawings delivered by August 31st, so we laid out our project schedule to meet this deadline.

Our survey team took to the beautiful Seelbach Hotel in early August and began their work, using laser distance meters for all of our measurements to make sure we got the most precise results possible. We had 2 primary surveyors onsite for 4 weeks who oversaw the entire project and made sure our field crew was working up to the high standards we require. We also added 2 additional surveyors for a week near the end of the project, in order to make sure we were able to meet our promised delivery deadline.

90% of the AutoCAD drafting we did for the project was completed onsite using laptop computers, which allowed for instant verification of all measurements before moving on to the next area of the hotel. This attention to detail and patience with all of our drawings is so important to our customer’s peace of mind. By drawing on-site, we can double and triple check our plans with the room’s actual measurements. This means that the architect gets the most accurate drawing possible, and we don’t have to come back to the site to remeasure.

Finally, we captured over 7,000 photos of the Seelbach’s extensive layout, which was quite a lot of material but helped us deliver the high-quality product that Campo Architects was expecting. Before we sent the final As-Built drawings and photos on to our client, PPM’s quality assurance team reviewed all of the 7,000+ pictures and compared them to the drawings to make sure nothing was omitted or drawn incorrectly, and that all the CAD standards and scope details were included and represented accurately.

The Biggest Challenges We Faced

We’re no strangers to running into speed bumps during our As-Built surveying projects, and our work at the Seelbach was no different. One of the aspects of our business that we take the most pride in is our ability to troubleshoot the various challenges that arise during any given project, and all of our surveyors, project managers and drafters have been extensively trained in how to overcome these obstacles.

One of the major issues we experienced while surveying the Seelbach came from the highly unique layout of the hotel guestrooms.  Out of the 321 total guestrooms, there were over 100 different floor plans, which is the most, by far, that we’ve ever encountered. Most hotels only have a few different room types, and the floor plates stack from level to level. 100 different guestroom layouts meant that each room had to be thoroughly inspected and accurately measured to capture its unique layout. When you add in the highly ornate architectural details inherent to a historic building like the Seelbach, it all added up to a lot of custom work on the As-Builts.  To mitigate any potential delays, our team pulled 20 hour shifts and worked through the weekends to finish up as soon as possible.

Another challenge, common to any hotel or place of business, was the constant flow of guests and employees.  We take great pride in the abilities of our onsite team members to work with and around people who are living and working in the properties we measure. As you can imagine, the Seelbach is consistently busy, filled with hundreds or even thousands of guests and staff every single day. This required quite a lot of coordination between hotel management and our surveyors to make sure that we were completing our work in a way that was least intrusive to their guests and operations as possible. Developing a great working relationship with the Seelbach staff was the first step in accomplishing this, and our team really went out of their way to make sure that all of the hotel’s employees felt comfortable approaching them.  Not surprisingly for such a legendary hotel, the entire staff was incredibly friendly and helpful throughout the project.  Some of them even gave us a hug when we left for the last time.

Though we faced a few challenges in this project, I think that we handled them with a lot of professionalism, and above all, made sure that we were communicating any changes in plans with our client while finding the best way to work around these issues. 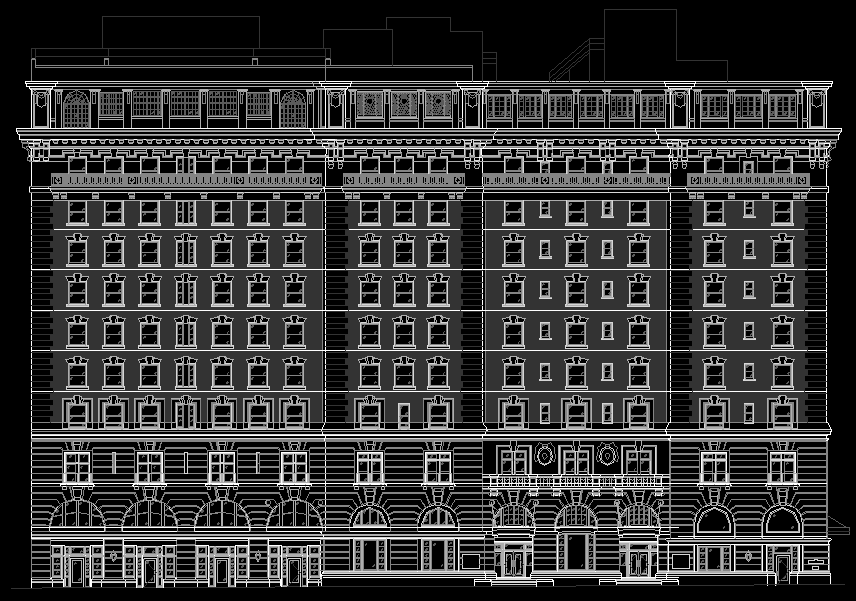 Exterior Elevation of the Seelbach Hotel along 4th St.

Getting Results for Our Clients

After over 650 hours of on-site surveying, drafting, quality assurance, and project management, we delivered the Seelbach As-Built survey project to Campo Architects.  Campo was extremely pleased with the professionalism, detail, and quality that PPM delivered.

Kerry Soniat, who is Campo’s Project Architect for the Seelbach, said, “Using PPM allowed Campo to manage our time efficiently and focus on more important design priorities for our client. We were impressed with the professionalism, timeliness and team efforts received from PPM. We look forward to working with PPM again in the future.”  It was extremely gratifying to receive this positive feedback after all of the hard work and dedication we put into the project.

Now, Campo is in the process of moving on to the next phase of the Seelbach project, which involves a detailed renovation plan for the guestrooms and common areas based off of PPM’s As-Built plans. These design and construction drawings will be much easier for Campo to generate with confidence because of our accurate and detailed As-Builts, and will be instrumental in helping write the Seelbach’s next historic chapter.

The life of an As-Built surveyor is a constant adventure!  OK maybe not always… but the interesting things we see and experience at a cool old building like the Seelbach is definitely one of the perks of the job.  Our time at the Seelbach Hotel left some indelible memories we will not soon forget.  Here’s a few of the most memorable highlights:

The Seelbach Hotel was one of the most extensive and unique projects we’ve completed, and it was such an honor to be part of a nation-wide team who were helping to restore one of the most historic hotels in the country.

And thanks, as always, for reading! 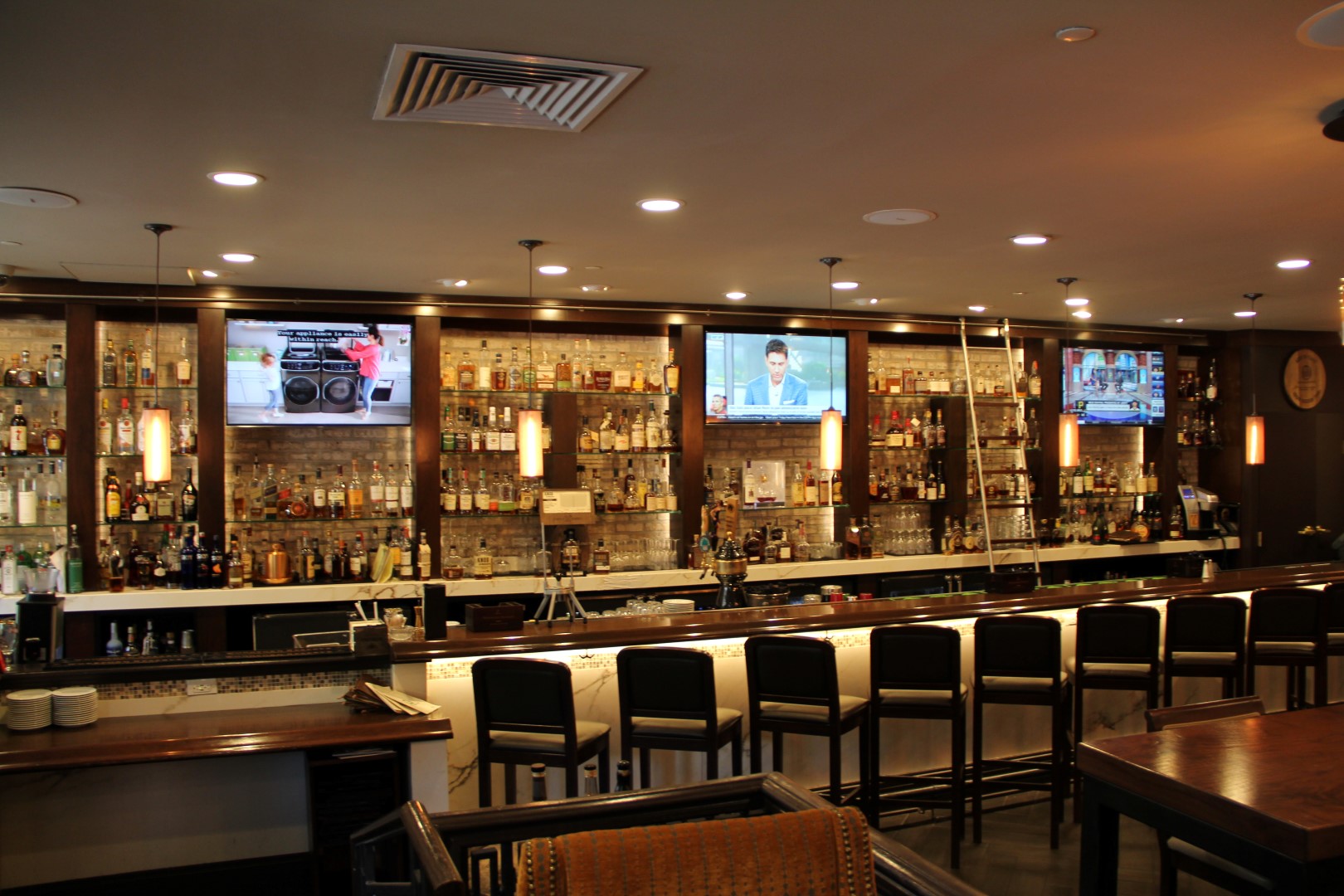 The Seelbach Bar. A perfect place to relax after a long day of surveying.

All stories by:Andy McFarland
This website or its third-party tools use cookies, which are necessary to its functioning and required to achieve the purposes illustrated in our Privacy Policy. By closing this banner, clicking a link or continuing to browse otherwise, you agree to the use of cookies. I agree.Privacy policy