Infusionsoft – A Better Way To Take Care Of Our Customers

We recently completed a major milestone at PPM, something that has alluded us for 15 years since our founding.  No, I’m not talking about a revenue goal, or a signature project, or a critical new hire… those things are all great indeed but only this particular milestone could be described as “Epic”.  On April 24-27, PPM had our first ever ROAD TRIP!!!

For the last 3 years I have been attending ICON, a small business conference in Phoenix that is put on by a company called Infusionsoft.  Infusionsoft makes an excellent small business CRM software that PPM has been using for about 4 years now – but in addition to that they also run various programs to share their considerable knowledge in the area of small business culture, organizational structure, growth strategies, and more.  I have made some great connections and learned so much at ICON every time I go, and I have always returned with some big new ideas to implement at PPM – most notably the importance of establishing and committing to a set of Core Values in your business, a practice we undertook in 2015 after I heard an excellent talk from a former Human Resources boss at Southwest Airlines.  Talk about a good source to be hearing about the importance of culture and values!

But prior to this year I had always attended ICON alone, leaving my coworkers back in Long Beach while I made my annual pilgrimage to the desert.  This year, I took advantage of some ticket deals and decided to give more PPM’ers a chance to experience this event which I have benefitted so much from.  I purchased 5 tickets, and I immediately set my mind to this question:  What’s the most fun way to travel 400 miles with a group of 5 people that you enjoy being with?  From somewhere deep inside, I heard the 20 year-old me answer loud and clear… Road Trip! (not gonna lie – the cost saving might have played a minor part as well).  To choose the team that would accompany me, I asked everyone that was interested to submit an application where they would say why they want to go, which sessions they were interested in and why, etc…  We ended up with an A+ team:  Cesar Luna, Alyson Buyuklian, Taylor Ferry, and Ai Mong De Leon.

I rented a minivan (oddly, Hertz didn’t have any Volkswagen buses) and we left Long Beach at 6PM on Monday.  The music was playing and the bass was pumping as we hit the I-10 freeway with Chipotle burritos in hand.  The only other stop we made was a bathroom and provisions break at the Circle K in Blythe.  Did you know that there is a Tapatio flavored Doritos now?  I learned that in Blythe, and they are delicious.  After 6 hours on the road, we pulled up to our rented house in Phoenix just after midnight, with the gas tank reading way past the slash after the “E”.  Living dangerously… 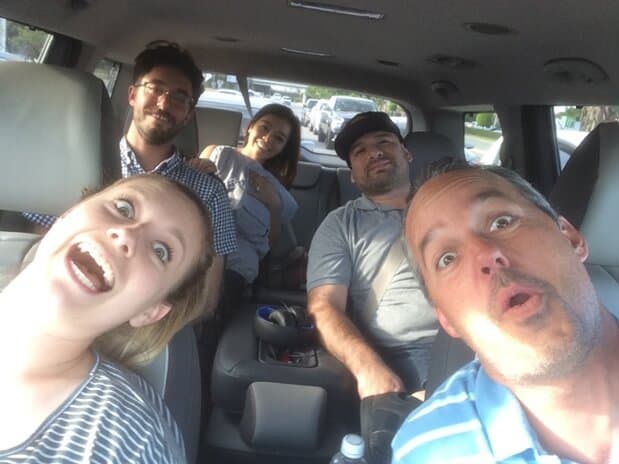 The 3 days of the ICON conference were awesome.  We all spread out to attend the topics we were most interested in hearing, and then met up a few times a day for lunch and the keynote speeches.  We got to hear from some amazing people including Jillian Michaels, Marcus Lemonis, and Clate Mask the CEO of Infusionsoft.  I could see the whole team getting inspired and motivated to bring back some new ideas to implement in PPM and in their own lives.  We also took the opportunity to meet with a few new clients in the Phoenix area including Circle K and American Installations. 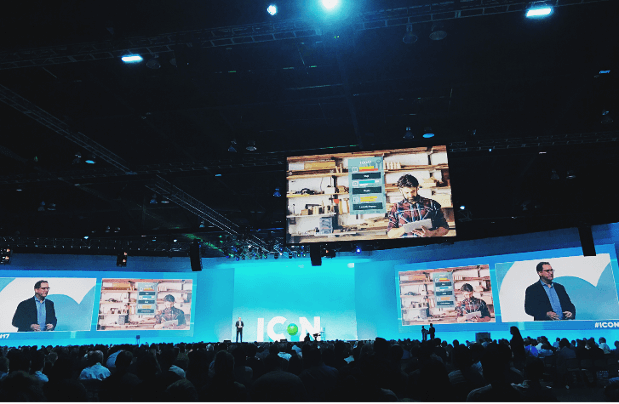 But more importantly, it gave all 5 of us a chance to spend some time together.  In addition to all that quality time in the minivan, we went to a Diamondbacks baseball game, a nice dinner, and just hung out at the house in the evenings playing Apples to Apples and watching 1970s game shows on TV (our favorite – old school Family Feud where the host Richard Dawson kisses all the ladies).  It was a special treat for me to get to hang out with these great people that I see almost every day at work.  We are a closer team because of it.

Cheering for something at the D-Backs game 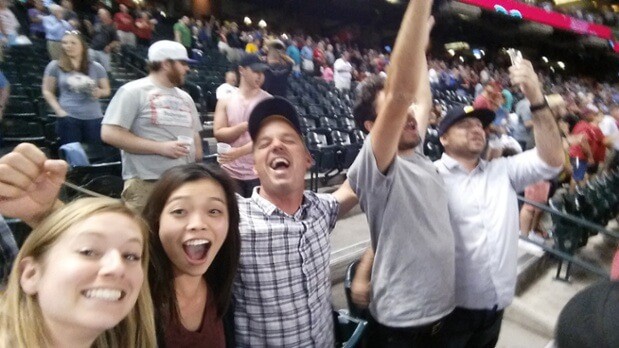 We drove home on Thursday afternoon after 3 long days and nights.  The ride back wasn’t quite as lively, as there was a significant amount of snoozing, but fortunately Sirius XM has a 90’s station so that kept the mood upbeat (except of course when “Everybody Hurts” by REM came on.  I had to pull over and get something out of my eye).